Toronto, Ontario, March 15, 2022 – Collective Mining Ltd. (TSXV: CNL) (“Collective” or the “Company”) is pleased to announce results of the first three diamond drill holes at the Olympus Central Target within the Guayabales project (“Guayabales”), Colombia. The Company currently has three diamond drill rigs operating at Olympus with two rigs testing the Olympus Central Target and one rig at the Olympus South Target as part of its minimum 20,000 metre program for 2022. A fourth diamond drill rig is expected to commence drilling at the Guayabales project prior to the end of March 2022.

“The broad intercepts from the initial drilling results at the Olympus Central Target represent a major gold and silver discovery within the Guayabales project. Our work to date has defined a large area of known mineralization and these results simply represent the beginning of drill testing within this target,” commented Ari Sussman, Executive Chairman. “With multiple drill holes advancing and plans to begin testing other major targets at Guayabales in the near term, including an outcropping copper and gold porphyry system at the Victory Target, there is much to look forward to as our fully funded drill program advances in 2022.”

Three diamond drill holes, totalling 1,423 metres, have been completed at the Olympus Central target with assay results anticipated in the coming days. Geological logging of the drill holes highlights the following important characteristics: 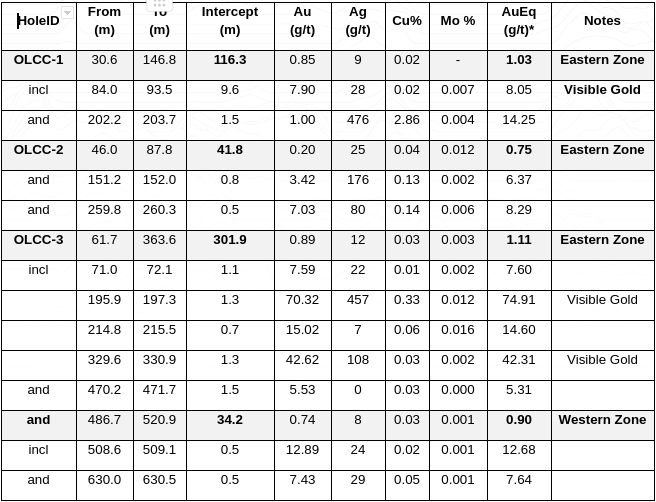 ** A 0.1 g/t AuEq cut-off grade was employed with no more than 10% internal dilution. True widths are unknown, and grades are uncut.

Collective Mining is an exploration and development company focused on identifying and exploring prospective mineral projects in South America. Founded by the team that developed and sold Continental Gold Inc. to Zijin Mining for approximately $2 billion in enterprise value, the mission of the Company is to repeat its past success in Colombia by making a significant new mineral discovery and advancing the projection to production. Management, insiders and close family and friends own approximately 40% of the outstanding shares of the Company and as a result are fully aligned with shareholders. Collective currently holds an option to earn up to a 100% interest in two projects located in Colombia. As a result of an aggressive exploration program on both the Guayabales and San Antonio projects a total of eight major targets have been defined. The Company is fortuitous to have made significant grass root discoveries on both projects with discovery holes of 104 metres @ 1.3 g/t AuEq and 710 metres @ 0.53 AuEq at the Guayabales and San Antonio projects, respectively. (See press releases dated October 18th and 27th for AuEq calculation.)

To schedule a one-on-one meeting with management please use the following link:
https://calendly.com/collectivemining/30min?month=2021-11

Figure 1: Plan view of the Guayabales Project and the Olympus Central target 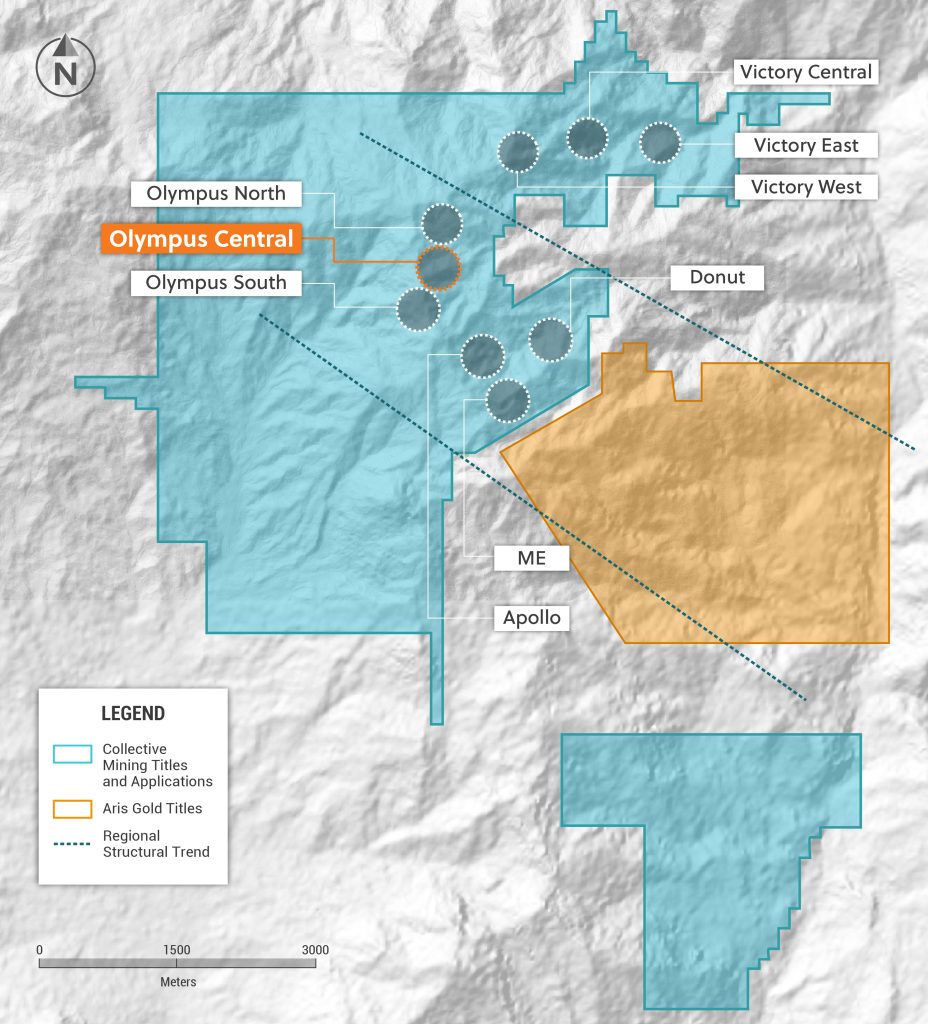 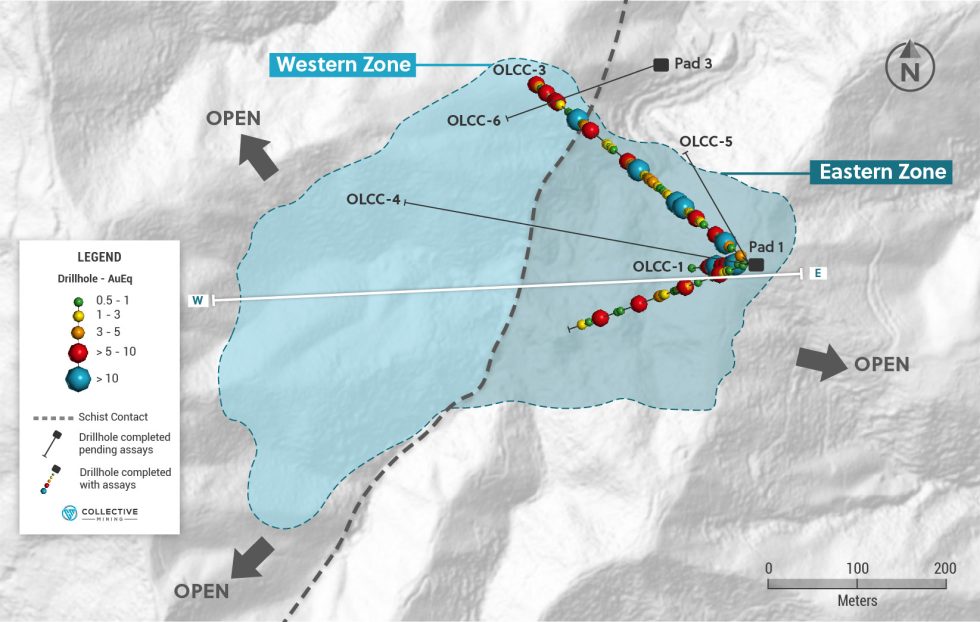 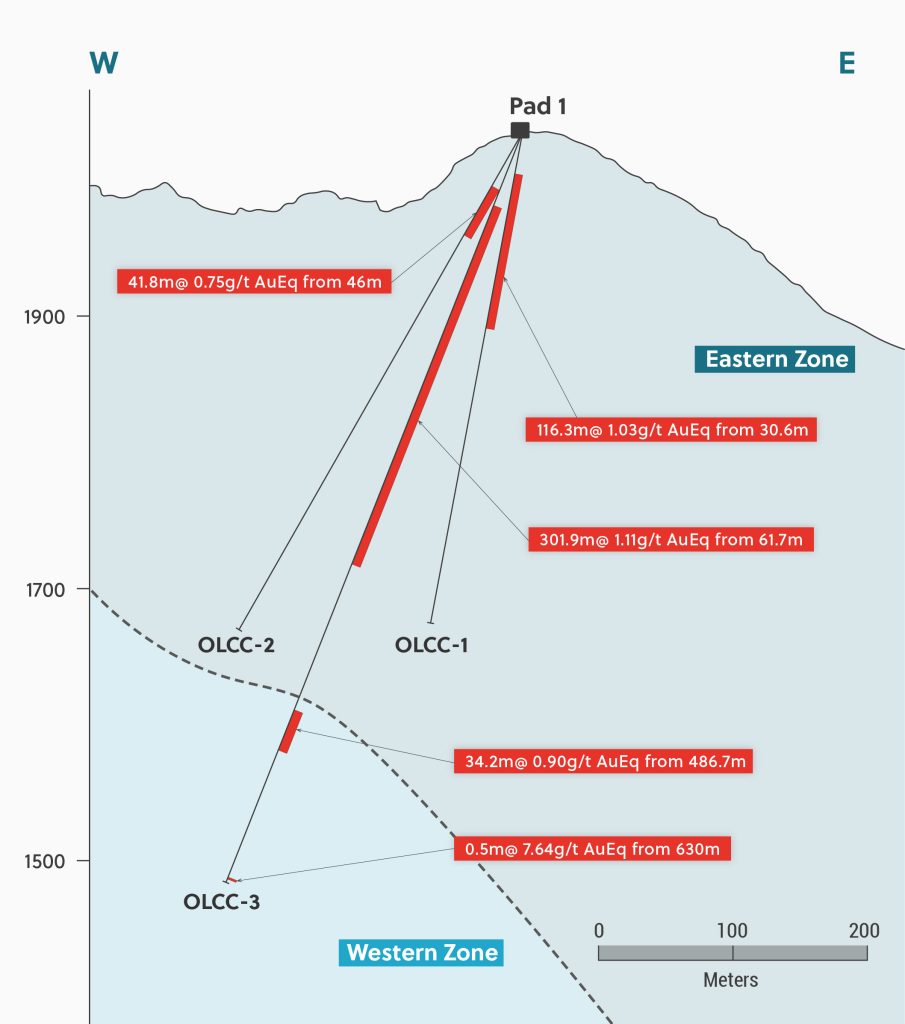