Toronto, Ontario, September 7, 2022 – Collective Mining Ltd. (TSXV: CNL) (OTCQX: CNLMF) (“Collective” or the “Company”) is pleased to announce assay results from reconnaissance holes completed designed to test new ideas at the Apollo target (“Apollo”) at the Company’s Guayabales project located in Caldas, Colombia.  Targets within Apollo consists of hydrothermal breccia, porphyry and vein systems including the recently discovered copper-gold-silver Main Breccia highlighted by drill hole APC-2, which intersected 207.15 metres @ 2.68 g/t AuEq (see press release dated August 10, 2022). Apollo is one of eight porphyry-related target zones situated within a three-by-four-kilometre cluster area generated by the Company through grassroots exploration at the Guayabales project.  As part of its fully funded 20,000+ metre drill program for 2022, there are currently three diamond drill rigs operating at the Apollo target with an additional rig drilling from underground at the Olympus target.

“Our very first reconnaissance drill holes undertaken outside of the Main Breccia at Apollo has led to some very positive and exciting surprises which include the presence of a high grade late-stage porphyry related CBM vein zone adjacent to our exciting Main Breccia discovery. These discoveries attest to the amazing potential of the Apollo target area, which continues to expand as we step-out with drilling. Over the coming months, our drilling will be aggressively focused on flushing out the multi-million-ounce potential of the Main Breccia discovery at Apollo, but without question the new discoveries announced today highlight excellent additional opportunities for follow up in the future,” commented Ari Sussman, Executive Chairman.

APC-4, which was drilled to the southeast from Pad 2, intersected a high-grade zone of sheeted CBM veins and returned:

APC-7 and OLCS-3 were drilled to the southwest from Pad 1 and intersected multiple mineralized breccia bodies at various depths and returned the following intercepts:

In addition to the new CBM vein discoveries a further two reconnaissance holes were drilled south from Pad 1 and southeast from Pad 2 to respectively test for breccia mineralisation and a mineralised porphyry body. Diamond Hole APC-9 had to be discontinued due to drilling problems and stopped short of the target zone. Diamond Hole APC-10 intersected altered quartz diorites with a porphyry vein stockwork and hosting anomalous copper, molybdenum, and gold values. The hole is interpreted to be peripheral to the main porphyry target as defined by copper soil anomalism and surface mapping. Further drilling is warranted in the future to better test both conceptual targets. Drill holes APC-12, APC-13 and APC-14 are underway with all three holes targeting the Main Breccia discovery at Apollo. Assay results for holes APC-6 and APC-8 are expected in the near term, with both holes intercepting more than 265 metres of potentially favourable mineralization. 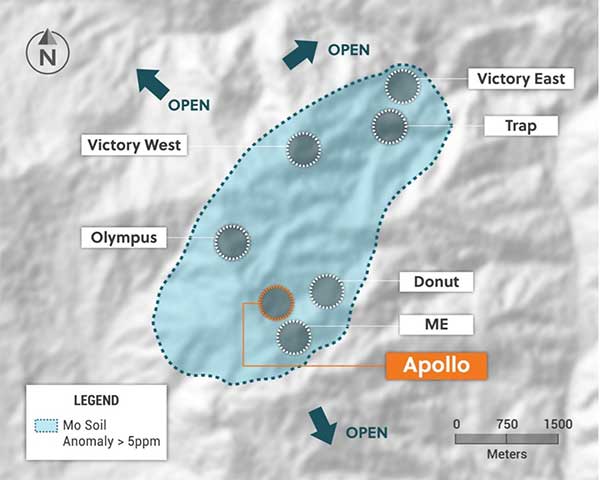 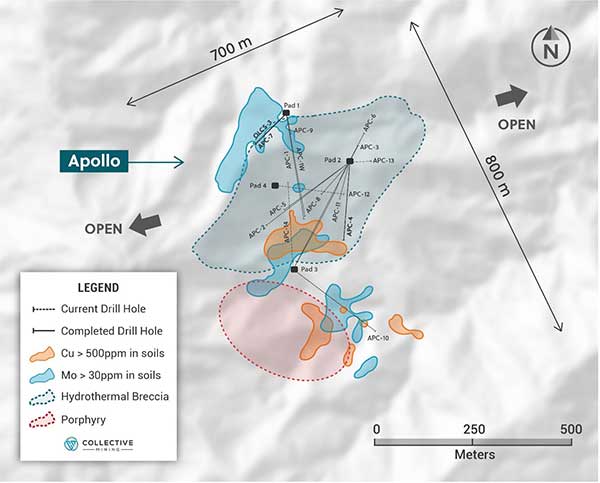 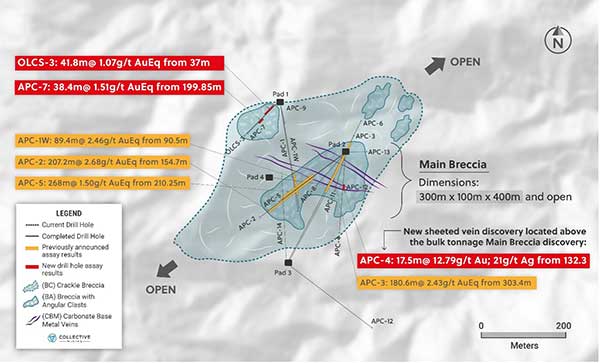 The Company currently holds an option to earn up to a 100% interest in two projects located in Colombia. As a result of an aggressive exploration program on both the Guayabales and San Antonio projects, a total of eight major targets have been defined. The Company has made significant grassroot discoveries at both projects with near-surface discovery holes at the Guayabales project yielding 302 metres at 1.11 g/t AuEq at the Olympus target, 163 metres at 1.3 g/t AuEq at the Donut target and recently, at the Apollo target, 207.15 metres at 2.68 g/t AuEq, 180.6 metres at 2.43 g/t AuEg and 87.8 metres at 2.49 g/t AuEg. At the San Antonio project, the Company intersected, from surface, 710 metres at 0.53 AuEq. (See related press releases on our website for AuEq calculations)