Toronto, Ontario, October 11, 2022 – Collective Mining Ltd. (TSXV: CNL) (OTCQX: CNLMF) (“Collective” or the “Company”) is pleased to announce visual observations from two step out holes drilled into the Apollo target (“Apollo”) which is located within the Guayabales project in Caldas, Colombia. The Main Breccia discovery at Apollo is a high-grade, bulk tonnage copper-gold-silver porphyry-related breccia target with previously announced intercepts including:

As part of its fully funded 20,000+ metre drill program for 2022, there are currently three diamond drill rigs operating at the Apollo target.

“These two new diamond drill holes are incredibly exciting as we have significantly expanded the size of the Main Breccia discovery at Apollo and while doing so, we have cut the longest intercepts of both total and continuous mineralization completed to date. Importantly, the system remains open to the north and northeast as both holes bottomed in mineralization. We look forward to continued aggressive drilling in order to see how much more this exceptional discovery can grow,” commented Ari Sussman, Executive Chairman.

Fourteen diamond drill holes with accompanying assay results have now been announced at Apollo and a further eleven holes are outstanding. The Company recently completed two northerly directed diamond drill holes, APC-17 and APC-22, from its southernmost drill pad (Pad 3), which were designed to test for mineralized extensions to the Main Breccia discovery. The following visual observations are highlighted from the two step out holes:

Figure 1: Plan View of the Main Breccia Discovery at Apollo Highlighting the Significant Extensions to the Zone Based on Drill Holes APC-17 and APC-22 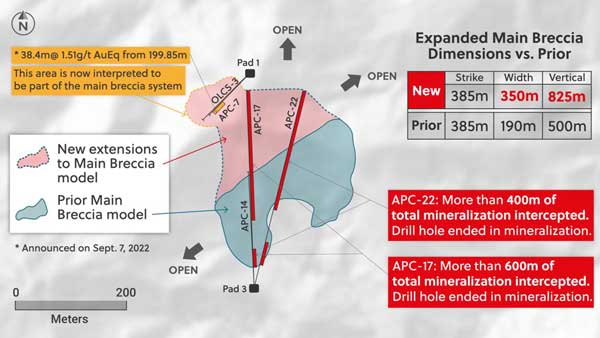 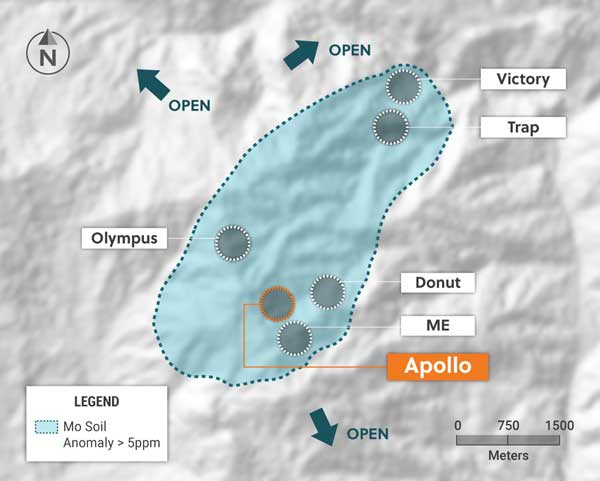 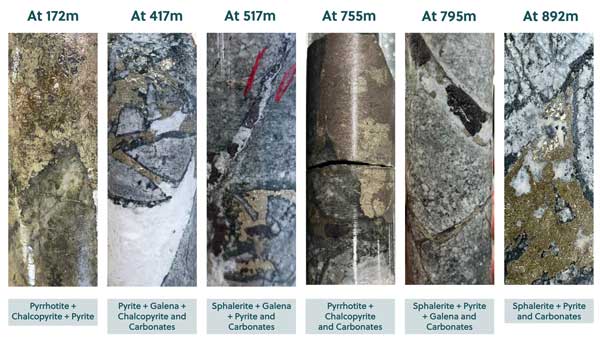 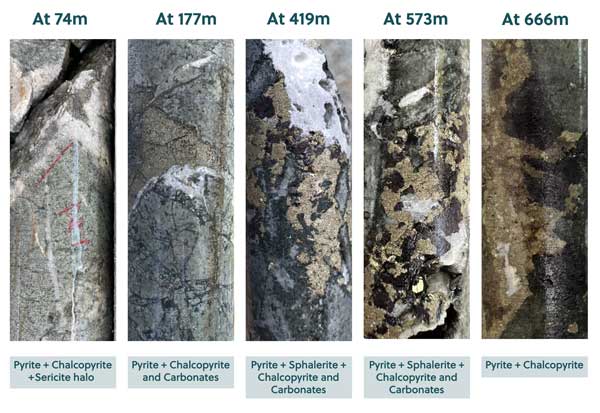 The Company currently holds an option to earn up to a 100% interest in two projects located in Colombia. As a result of an aggressive exploration program at its flagship Guayabales project, a total of seven major targets have been defined. The Main Breccia discovery within the Apollo target is the most important to date and is characterized by bulk tonnage, high-grade copper-silver gold mineralization with highlight drill results including: 207.15 metres @ 2.68g g/t AuEq, 265.75 metres at 2.44 g/t AuEq and 237.7 metres at 2.88 g/t AuEq. Other grassroots discoveries include near-surface discovery holes yielding 301.9 metres at 1.11 g/t AuEq at the Olympus target, 163 metres at 1.33 g/t AuEq at the Donut target, and 102.2m @ 1.53 g/t AuEq at the Trap target. At the San Antonio project, the Company intersected, from surface, 710 metres at 0.53 AuEq.  (See related press releases on our website for AuEq calculations). The Company’s fully funded, 20,000 metre drill program for 2022 is ongoing with a significant number of assay results expected through the remainder of the year.