The second zone encountered in hole APC-17 cut the longest intercept of continuous mineralization within the Main Breccia discovery drilled to date with results as follows:

“The intersection of high-grade and shallow mineralization at Apollo demonstrates the excellent metal endowment of the Main Breccia and most importantly, the dimensions of the system continue to expand and clearly point to the fact that we are dealing with a large-scale discovery. It is truly remarkable to drill a 912-metre-long hole that bottoms in mineralization. Finally, the shallow, higher grade intercepts encountered in APC-17 and APC-18 are more than 300 metres apart and confirms that the southern portion of the deposit is where the system comes to surface. As a result, we are about to start construction of a new drill pad located between the two shallow intercepts in order to start defining the shallow portion of the Main Breccia mineralized system,” commented Ari Sussman, Executive Chairman.

Nineteen diamond drill holes with accompanying assay results have now been announced at Apollo and a further eleven holes are outstanding. The Company recently completed four drill holes; one northerly directed, step out hole (APC-17), to test for mineralized extensions to the Main Breccia discovery, a second shallow hole drilled southwesterly to define extensions of newly discovered mineralized breccia outcrops located in the southern portion of the deposit and two fringe holes drilled at shallow angles to the west of the Main Breccia discovery.

Drill hole APC-17 was drilled approximately due north to a maximum depth of 912.60 metres. The hole intersected three mineralized zones: 72.3 metres of mineralization beginning at 118.20 metres down hole (100m vertical), 11.65 metres of mineralized breccia from 252.6 metres (220m vertical) and another 547.65 metres of mineralization from 365.15 metres down hole (330m vertical) to the end of the hole at 912.80m (825m vertical).  The hole terminated while still in mineralized breccia due to limitations of the drill rig. Total cumulative mineralization in this diamond drill hole was 628.3 metres and is the most mineralization drilled in a single hole to date into the Main Breccia discovery at Apollo. The shallow intercept is hosted within angular porphyry related breccia containing chalcopyrite (1-2%) with pyrite and pyrrhotite and is located directly beneath recently discovered mineralization outcropping at surface. The deeper and longer intercept is also hosted within angular porphyry related breccia with the matrix filled with pyrite, some chalcopyrite and overprinting carbonate base metal veins (“CBM”). The following results are highlighted:

Drill hole APC-18 was drilled in a southwest direction and intersected shallow, copper-silver-gold mineralization from 136.05 metres to 304.65 metres with the hole terminating at a final depth of 499.05 metres. The mineralized breccia contains a matrix of chalcopyrite and pyrite is strongly overprinted by numerous zones of CBM veins hosting sphalerite and galena. The hole was drilled below outcrops of breccia mineralization in the south-central portion of the deposit with assay results as follows:

With the result of APC-17 and recently announced visuals from APC-22, the potential total volume of rock hosting the Main Breccia discovery within it has approximately tripled in size with the dimensions now measuring 385 metres along strike by 350 metres width by 825 metres depth versus prior dimensions of 385 metres x 190 metres x 500 metres.  The discovery remains wide open for expansion and further step-out holes are currently being designed.

Holes APC-15 and APC-16 were drilled at shallow angles on the western periphery of the main breccia body. APC-15 was drilled to the northwest and intersected mineralized crackle breccia returning 56.05 metres @ 0.57 g/t gold equivalent from 68.6 metres (55 metres vertical). This is a new mineralized area outside of the Main Breccia discovery at Apollo. APC-16 was also drilled outside the Main Breccia discovery to the southwest and intersected 500 parts per million copper in crackle breccia from 200 metres and until the end of the hole at 303.35 metres. The Company believes that both APC-15 and APC-16 may have drilled over the top of the Main Breccia discovery in these locations.

Three rigs continue to drill at Apollo with additional assay results anticipated in the near term. 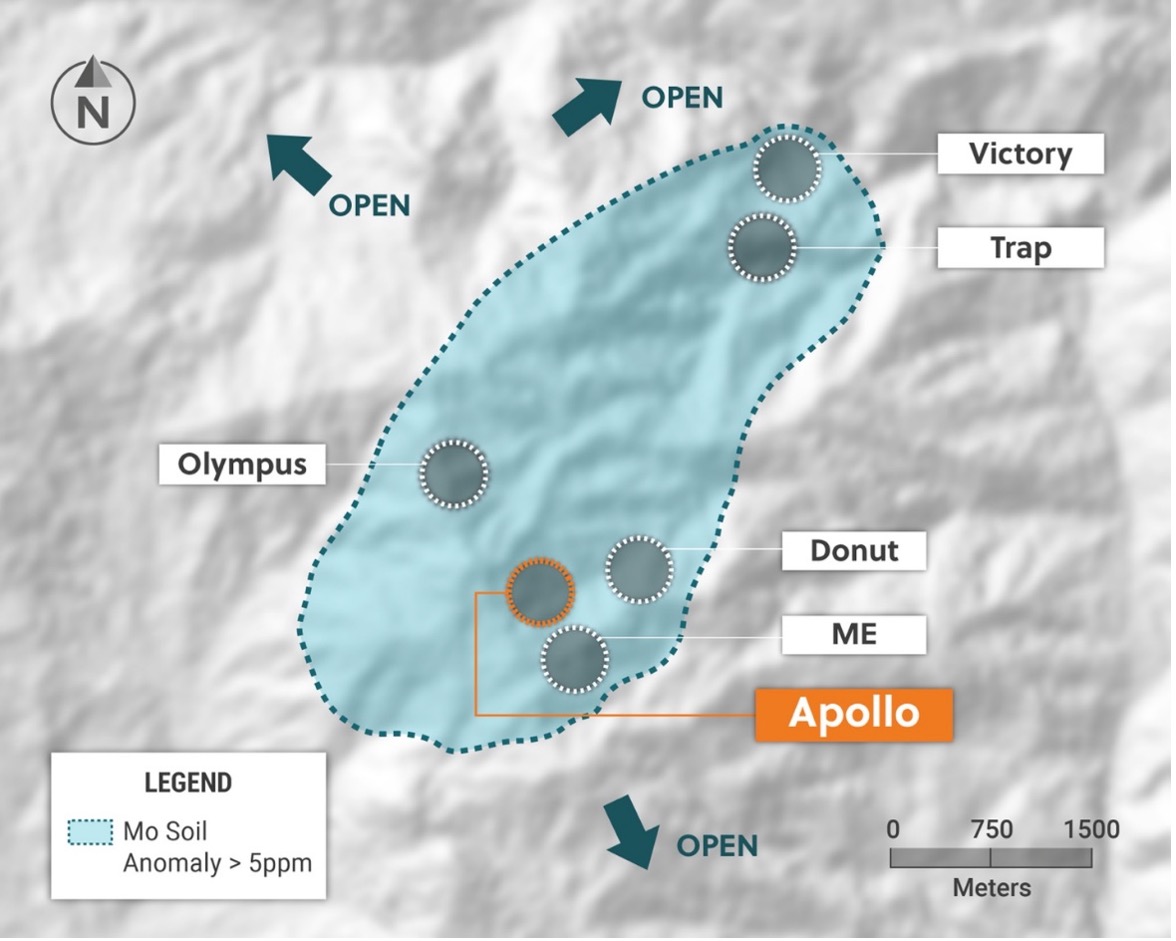 Figure 2: Plan View of the Main Breccia discovery at Apollo Highlighting New Drill Holes APC17 & APC-18 and the Expanded Dimensions of the Discovery 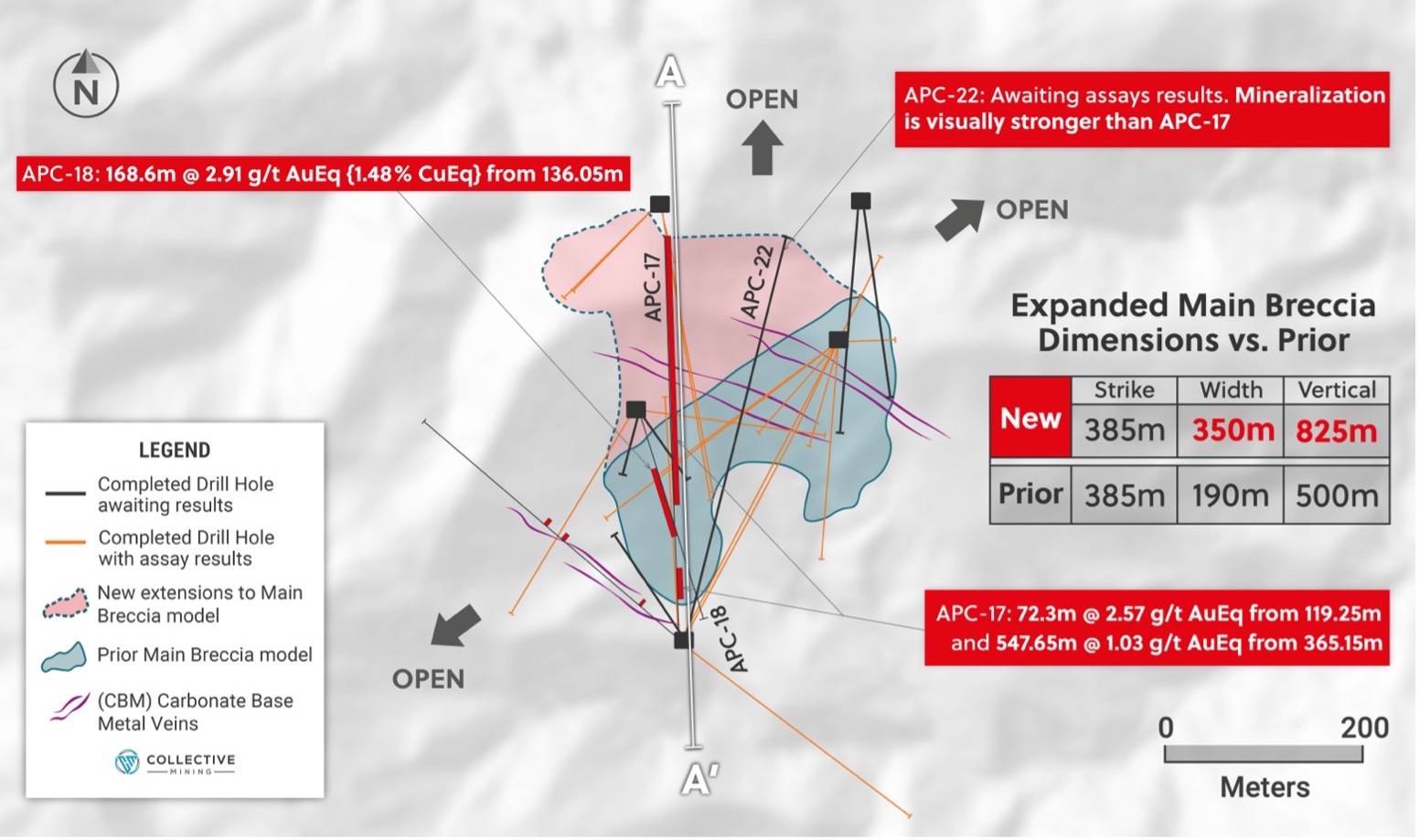 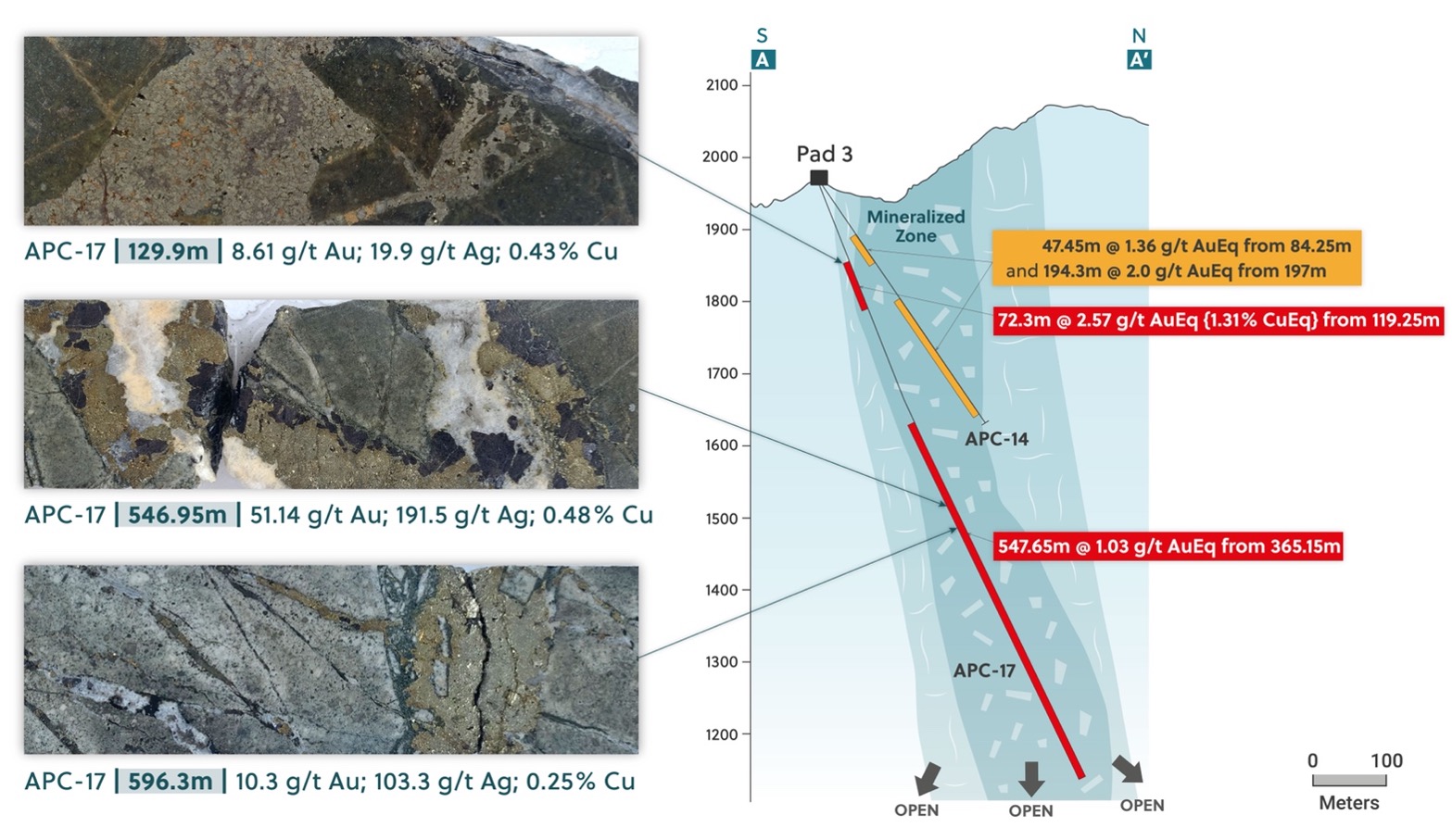