Ari Sussman, Executive Chairman commented: “APC-22 is an important drill hole for the Company. Firstly, it significantly expanded the mineralized footprint of the system to the north-northeast and remains completely open for further expansion. Secondly, the near surface high-grade intercept in the hole, which was enriched by both porphyry style copper and gold and low sulphidation derived precious metals flooding the breccia matrix, opens up a new high-grade area for drilling. Drill hole APC-29, for which we do not yet have assay results and was drilled from the same pad, intersected similar style mineralization near surface at even greater intensity than APC-22. We believe that we have a “tiger by the tail” and that the system will continue to grow both in grade and scale with further drilling.”

Assay results for twenty-five diamond drill holes have now been announced at Apollo with results for a further six holes expected in the near term. This press release deals with results from two step out holes drilled to extend the deposit northwards and eastwards, and a shallow hole drilled on the western side of the deposit.  Results and details of three drill holes are summarized below.

APC-22 is a step out hole drilled to the north-northeast from Pad 3 to a maximum depth of 734.8 metres and intercepted three mineralized zones. The two shallow zones are located directly beneath surface outcrops with the initial 47.25 metre intercept commencing at 89.25 metres downhole (60 metres vertical), and a second zone starting at 167 metres downhole with 16.80 metres of mineralization (100 metres vertical). Mineralization in these shallow zones is hosted within the matrix of angular quartz diorite breccia with sulphides consisting of chalcopyrite (1%-2.5%), pyrrhotite (1%) and pyrite (1%-1.5%).  Finally, the third zone, which starts at 308.80 metres downhole (276 metres vertical) hit 424.10 metres of continuous mineralization until the end of the drillhole at 734.80 metres in length (650 metres vertical). This long and continuous zone of mineralization consists of chalcopyrite (0.5%) and pyrite (1%-2%) in the breccia matrix which is in turn overprinted by multiple zones of sheeted carbonate base metal (“CBM”) vein material, which are predominantly sphalerite rich with minor galena. The hole bottomed in mineralization due to the limitations of the drill rig with assay results as follows:

Hole APC-23 was drilled south from pad 5 to a maximum downhole length of 454.9 metres. This step- out hole aimed to test for an eastern extension to the Main Breccia system. The hole intercepted mineralization over 71.7 metres begining at 311.4 metres downhole. Mineralization in this eastern area occurs in both angular (higher grade) and fluid breccia (lower grade) morphologies and is associated with sulphide cement containing both pyrite and pyrrhotite with some overprinting CBM veins with assay results as follows:

Hole APC-24 was a shallow hole drilled south-southwest from Pad 4 to test for western extensions to the main breccia. The hole drilled to a maximum downhole length of 349.9 metres and only intersected mineralized crackle breccia from 101 metres (85 metres vertical depth). Gold and silver mineralization relates to matrix sulphides including pyrite (1%) and pyrrhotite (0.5%) with overprinting CBM veinlets containing sphalerite and some galena. The crackle breccia locates peripherally and above the Main Breccia system. Steeper drilling is thus required in this area to intersect the Main Breccia body. Nevertheless, mineralization was observed in the crackle breccia and returned the following results:

In 2022, a total of 14,975 metres (31 holes) were drilled at the Apollo target. To date assay results have been released for 25 holes with results for the holes that remain outstanding expected in early 2023.

The Company’s 2023 drill program will begin in the coming days and will focus on targeting the high-grade subzones within the Main Breccia system while simultaneously expanding the potential size of the system. Additionally, the Company will remain aggressive in testing new targets at Apollo including the newly generated copper and molybdenum porphyry target located 150 metres south of the Main Breccia system. 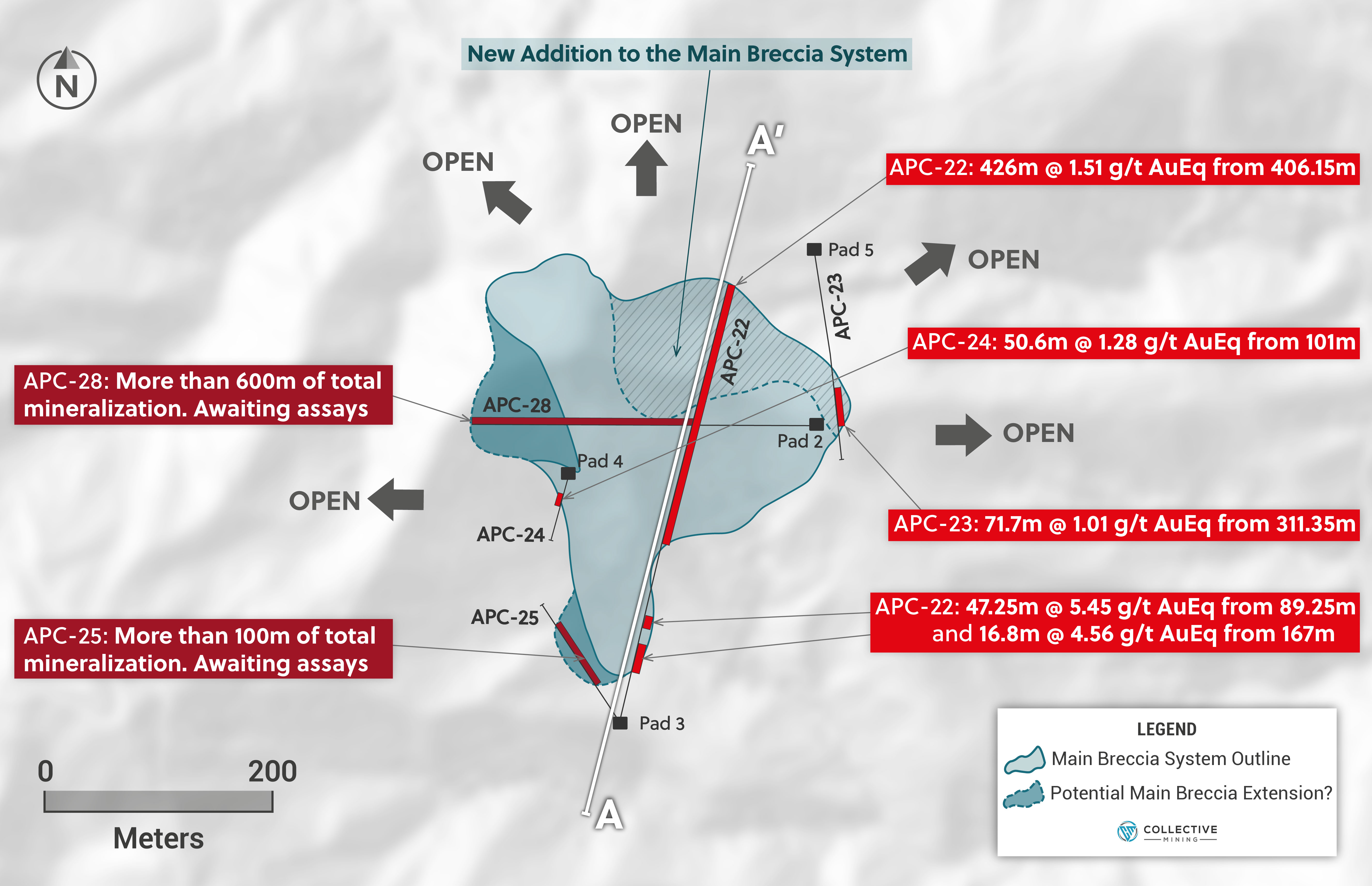 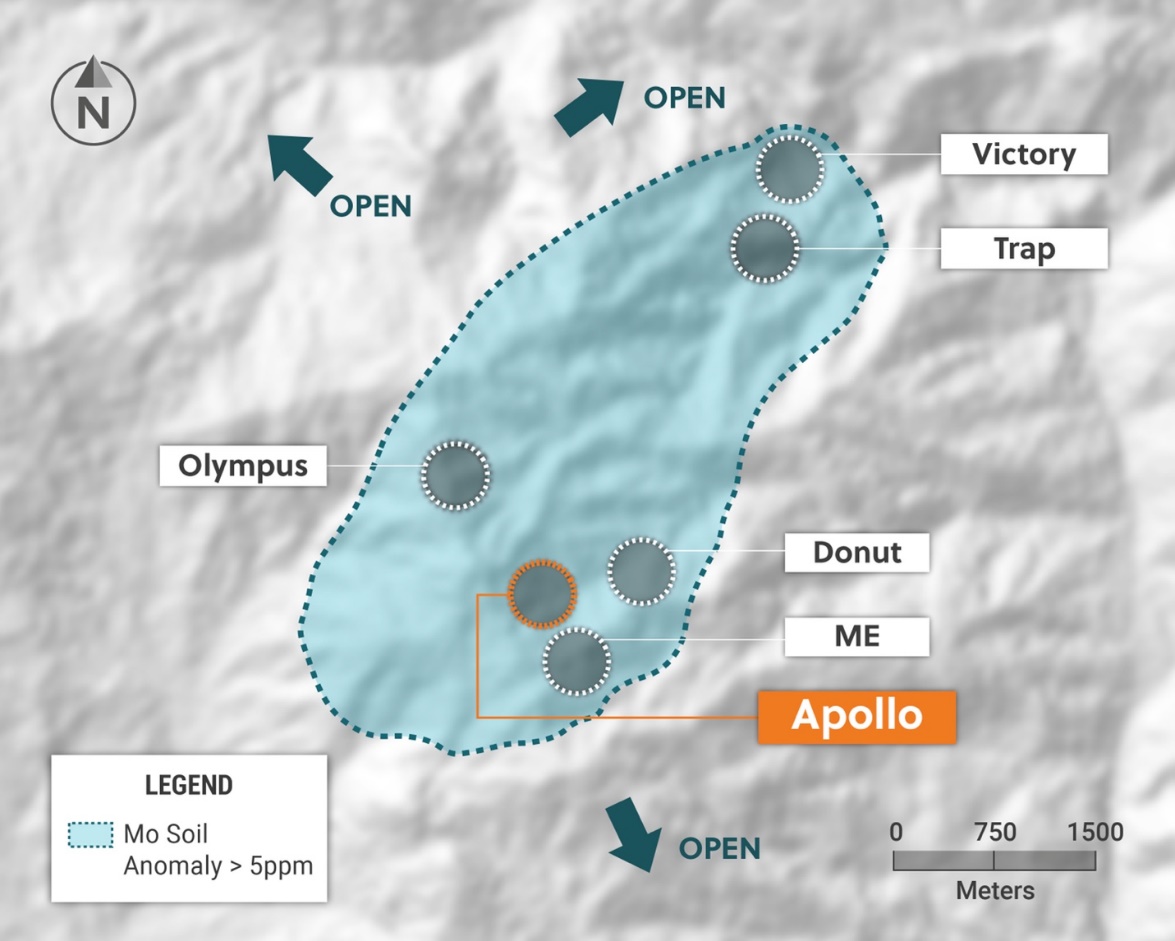 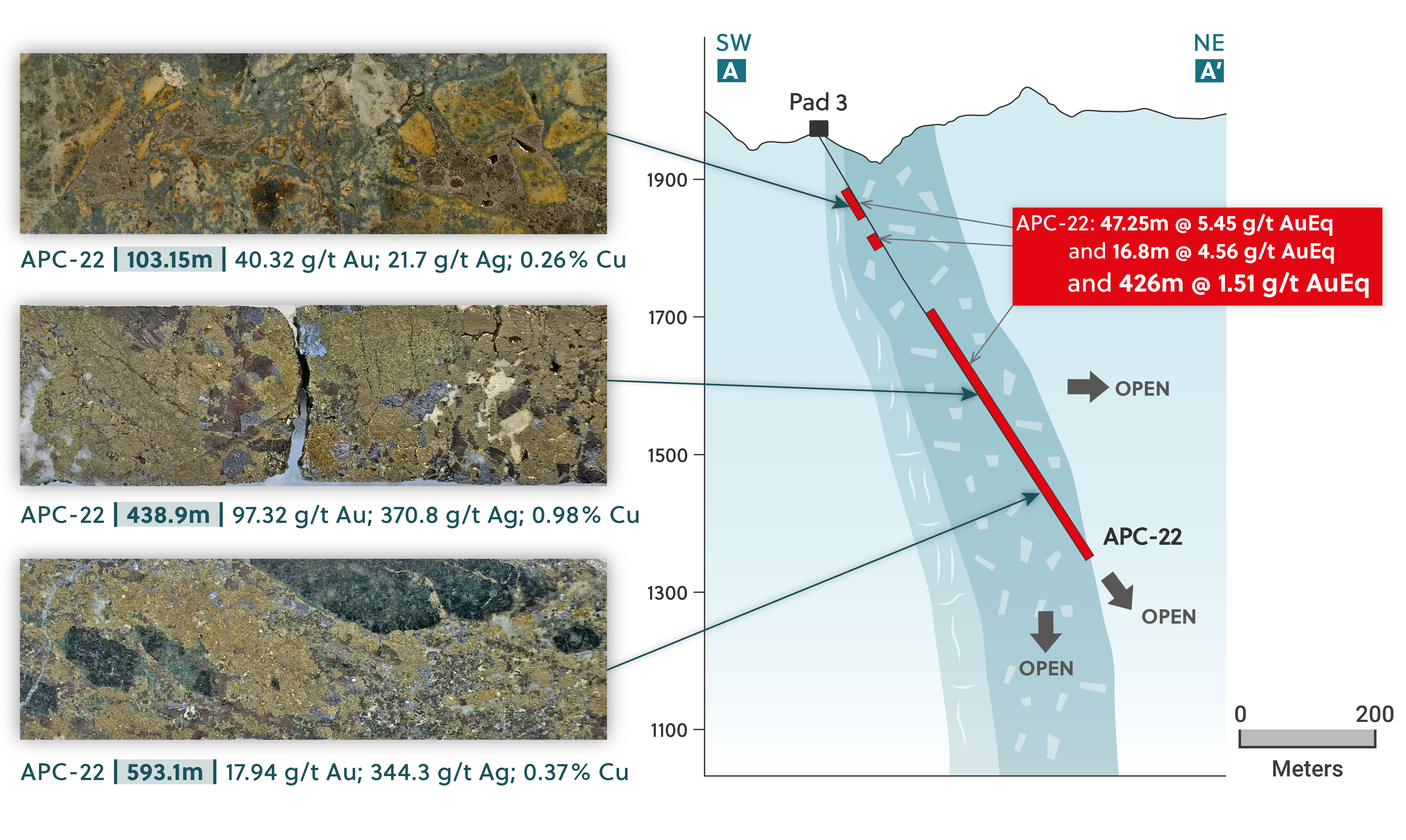 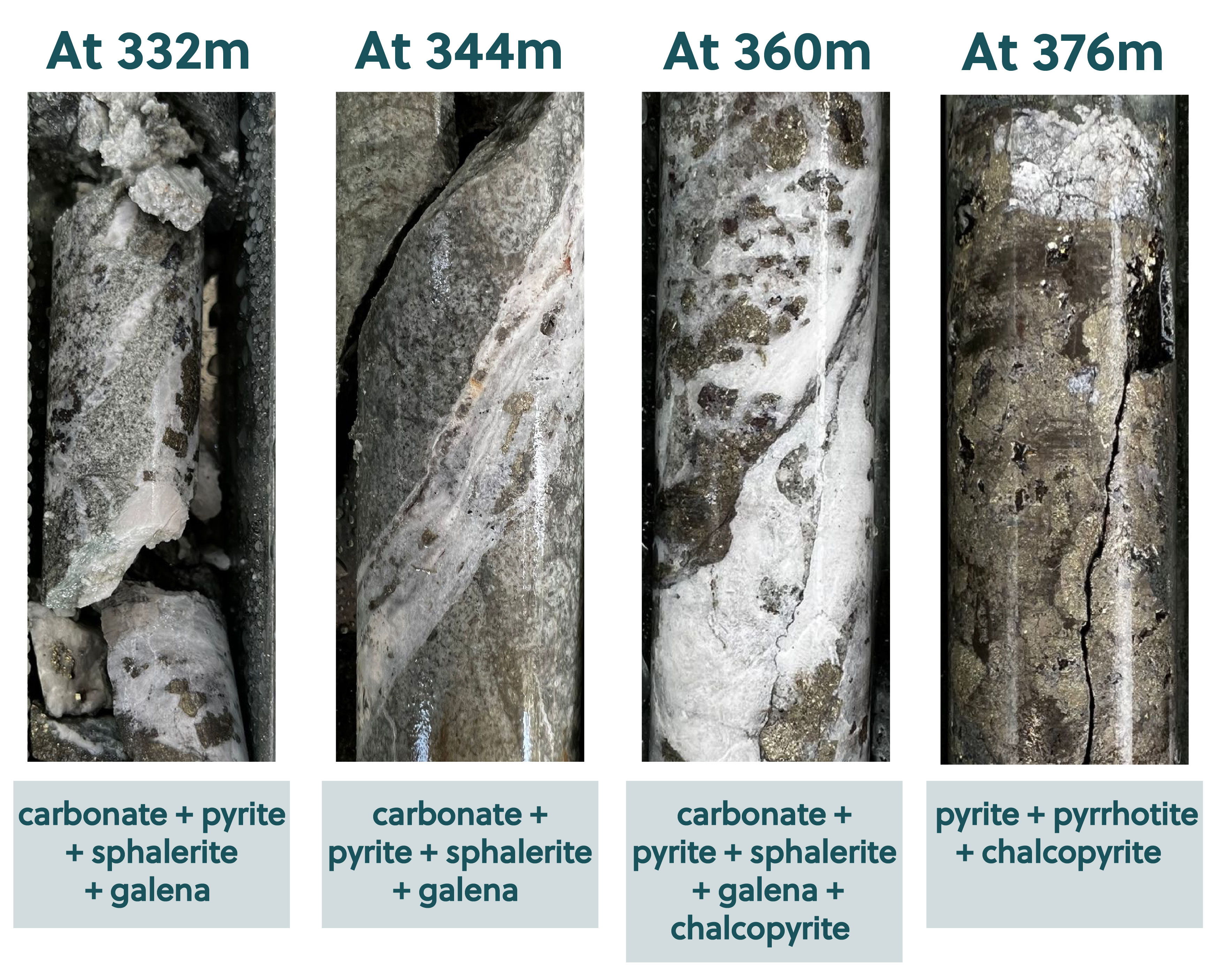